The V&A purchased a pair of Champagne Standard Lamps with funding from the National Heritage Memorial Fund, Art Fund and the V&A Members. The lamps were the joint creation of artist Salvador Dalí (1904-1989) and his most important British patron, Edward James (1907-1984).

Each lamp is made from ten oversized brass champagne coupes, one stacked on top of the other, standing on a base in the form of a Victorian papier-mȃchè tray decorated with gold ivy tendrils, berries and leaves. They were designed for James’s Monkton House in West Sussex, which he renovated in the mid-1930s as part of his attempt to create ‘a complete Surrealist house’. The Champagne Standard Lamps are now on display in the V&A’s Twentieth-Century Gallery alongside the Mae West Lips sofa, also designed by Dalí and James for Monkton House.

Dalí was the most famous of all Surrealist artists and remains one of the most popular of modern artists today. In 1935, Dalí met a kindred spirit in the British collector and poet Edward James. This led to a deep friendship between James and Dalí, with James becoming a large-scale collector of Dalí’s work, and the pair embarked on various artistic collaborations. James rapidly became Britain’s most distinguished supporter of Surrealism and was partly responsible for its international recognition. His collection is one of the largest and most important in the world, although the majority of this has now been sadly dispersed.

The Champagne Standard Lamps were sold by the Edward James Foundation in 2017 and a temporary export stop was placed on the lamps after the buyer applied for a licence to remove them from the UK. The V&A then fundraised to secure them for the nation. 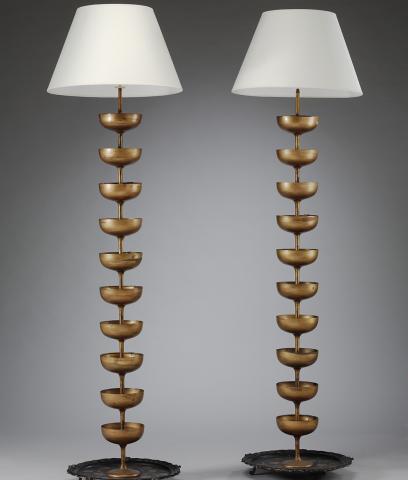