The Box, Plymouth has acquired a ceramic crab made by of salt-glazed stoneware by Robert Wallace Martin, June 1860.

The artwork is an experimental grotesque anthropomorphic crab and is one of a very small number of large-scale sculptural works made by the Martin Brothers and is the only one known in the UK.

As well as being of artistic importance the crab also reflects the social history of Victorian Britain as well as our sculptural and decorative art history.

The Box is a new £46million museum, gallery and archive that is set to open in 2020.

This acquisition will complement an already planned display of Martinware, which will be exhibited in a massed display case of 350 examples from their decorative arts collection. The applicant would look to showcase the crab alone in front of this display, creating a greater context for the work.

The ceramic crab is made from salt-glazed stoneware and measures 21 x 48.5 x 41.5cm and has along its claw a bold signature: R. W. MARTIN 6.80 (Robert Wallace Martin, June 1860). This larger-than-life crustacean has personable human features including grinning eyes, a curling moustache, cropped beard and a smile of uneven teeth.

The Martin Brothers are considered the first art potters of Britain and of the four brothers, Robert Wallace Martin was the most experimental and the driving force behind the studio’s famously grotesque designs. It is considered one of the first transitional works that bridged the applied and the fine arts, representing an important moment in both the Martin Brothers’ production and Britain’s sculptural and decorative art history.

This ceramic piece was made using a complex firing method from the medieval era that the Martin Brothers helped to revive. Salt glazing was typically employed for hardy jugs and sewer pipes but the Brothers explored its artistic potential as demonstrated by this sculpture.

The Box are planning a special temporary exhibition focused on Martinware in 2021/2022. As part of this, the applicant would be devising a public programme around the sculpture, aiming to celebrate and contextualise the acquisition. 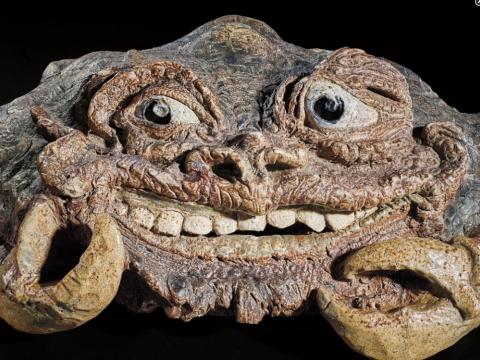